War On Christmas: Down The Chimney 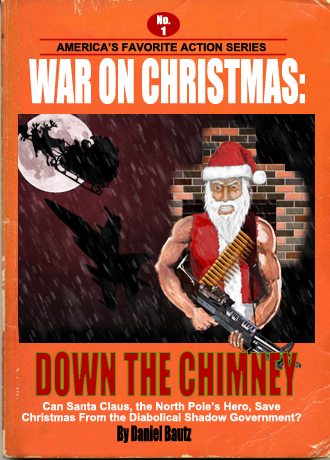 Just dropped a new chapter tonight in my serial action-adventure thriller, War On Christmas: Down the Chimney. Things are getting hot, Santa’s kidnapped, getting tortured, the North Pole is just now finding out their North American operative is compromised. If you haven’t read it yet, you should.

Following in the tradition of  “First Blood,” “The Destroyer,” & “The Executioner” series, The War on Christmas series is full of action, adventure, and thrills for hard-scrabble fans of action. This is my homage to those books that I tore through as a young lad, thirsty for action and adventure with a small twist.

Santa Claus finds himself interrogated and tortured by a secret government organization. His captors seem bent on finding out the secrets of the North Pole and ending Christmas. Christmas is under attack, and John Trafalgar, the Santa Claus serving the United States, finds himself caught in the crossfire. He must fight his way from captivity and find his way back to the North Pole before December 25th while protecting the secrets of his adopted home.

Using the combat techniques he learned in special ops in Nam,  his wits, and help from the Saints of Nicholas; This is one Santa who’s not going down easy. With December 25 coming up fast, time is running out. The secret government organization on his trail will stop at nothing to keep him from saving Christmas.  John Trafalgar, aka Santa Claus, and Christmas are in real trouble. The War on Christmas is heating up, and Santa is coming Down The Chimney!

Not only will you be able to read my book there but can subscribe to as many others as you wish for $4.99 a month. Literally, hundreds of authors are writing on Channillo. The first month is free, so check it out with no obligation.

You can read the first chapter for free right here. War On Christmas: Down The Chimney Chapter One: Reindeer Down

For Dog Lovers Only

Aren't songs of grief lullabies to the lost?

Seeking Solace in the Horizon of Life & Beyond.

Understanding ourselves and the world we live in.

I hope that someone sees this page and decides not to give up...

Beyond the Crypts and Castles
LikesInternetMarketing.com

A site of writings, musings, and geek culture, all under one domain!